Project CHAANGE (Counternarratives for the History of African Americans Needing and Getting Emancipated): is a multiple-day professional development experience for P-12 teachers.

The Institute is framed using the theme of Change- borrowing from Bob Dylan’s 1964 classic song, the times, they are a-changin’. The song, released during the Civil Rights movement, focuses on addressing social injustices. Under the context of exploring African American national and global activism, Institute instructors and guest lecturers will guide teachers in developing critical inquiry instructional plans that teach about freedom movements in the 20th and 21st centuries.

Gloria Swindler Boutte is a Carolina Distinguished Professor of Instruction and Teacher Education and the Executive Director for the Center for the Education and Equity of African American Students at the University of South Carolina. Gloria's focus is on defining equity pedagogies and advocating social justice issues. She is revolutionizing teaching curricula that embraces cultural diversity though a global approach.

Toby Jenkins is an Associate Professor of Curriculum Studies and Director of the Museum of Education at the University of South Carolina.  Her work focuses on the use of culture as a politic of social survival, a tool of social change, and a transformative space of creative and critical pedagogy. She is also interested in the ways in which culture influences activist minded leadership.

Evelyn Bethune is the granddaughter of Dr. Mary McLeod Bethune and CEO of The Bethune Publishing House, Inc. She is also the founder of MMB Institute, a mentoring and instructional foundation for young people of all ages. She is a published author, lecturer and motivational speaker working to expand knowledge of Mary McLeod Bethune and to ensure the continuation, growth and development of her legacy by encouraging and promoting education and community service in a variety of platforms. Bethune Publishing publishes books that are motivating, educational and visionary.

LaGarrett J. King is an Associate Professor of Social Studies Education at Clemson University. He received his Ph.D. from the University of Texas at Austin after an eight- year teaching career in Georgia and Texas. His primary research interest examines how Black history is interpreted and taught in schools and society. He also researches critical theories of race, teacher education, and curriculum history.

Bobby Donaldson is an Associate Professor of History at the University of South Carolina. A scholar of southern history and African American life and culture in the nineteenth and twentieth centuries, Donaldson’s research and writings explore African American intellectual thought, print culture, education and religion. Additionally, he has served as a consultant for museum exhibitions, archival collections, oral history initiatives, documentary films, and historic preservation projects, including the renovation of the Booker T. Washington High School in downtown Columbia. In 2008, the Historic Columbia Foundation awarded Donaldson and his students the Helen Kohn Hennig Prize for their documentary project on the Ward One community in downtown Columbia. Currently, Donaldson leads the Center for Civil Rights History and Research, housed in the Hollings Special Collections Library. He also serves as the lead scholar for Columbia SC 63: Our Story Matters, a documentary history initiative that chronicles the struggle for civil rights and social justice in Columbia.

Dawn Dawson-House is Director of Corporate Communications for the SC Department of Parks, Recreation & Tourism (SCPRT). She is the agency's corporate communications director and spokesperson, helping to shape and deliver SCPRT's positions, tone and voice on parks, recreation and tourism matters. She publishes the monthly e-newsletter, South Carolina Tourism Today, which communicates key metrics on tourism’s impact on the South Carolina economy and general news about SCPRT. She also organizes special media events, public speaking appearances and press conferences.

Jon Hale is an Associate Professor of Educational History at the University of South Carolina.  His research focuses on the history of student and teacher activism, grassroots educational programs, and segregated high schools during the civil rights movement. His award-winning book, The Freedom Schools: A History of Student Activists on the Frontlines of the Mississippi Civil Rights Movement (Columbia University Press, 2016) examines the role of educational activism during the Civil Rights Movement. He is a co-editor of The Freedom School Newspapers: Writings, Essays and Reports from Student Activists During the Civil Rights Movement, (University Press of Mississippi, 2015). His current book projects focus on the history of southern black high school student activism after the Second World War and the history of the school choice reform movement. His research has been published in history and education journals, including the Journal of African American History, the History of Education Quarterly, The Journal of Southern History, South Carolina Historical Magazine, and the Journal of Social Studies Research. He has also published editorials and commentary pieces in The Atlantic, CNN, Education Week, the African American Intellectual History Series, and Process: A Blog for American. His research was also referenced in interviews with The New Yorker, CNN, the Associated Press, “This Morning” (ABC), PBS, and California and South Carolina Public Radio. Dr. Hale has worked with PBS as a consultant for Stanley Nelson’s documentary, Freedom Summer, as well as the Grammy-nominated Two Trains Runnin’, which was produced by award-winning author and filmmaker Benjamin Hedin. Dr. Hale currently serves as an advisory board member of the Charleston Freedom School, co-director of the Quality Education Project, co-director and co-founder of the Charleston Civil Rights Film Fest, and a board member of the Southern Initiative of the Algebra Project.

Carol Singletary is a faith-based initiative coordinator for the S.C. Campaign to Prevent Teen Pregnancy. She has decades of experience in the area of social services, including state director for youth programs at the South Carolina Department of Social Services, and case manager at Richland and Florence counties’ Departments of Social Services. She is Executive Director of Francis Burns Methodist Church Freedom School.

GOAL 2: To provide knowledge and experiences on selected historic sites in the upstate, midlands, and low- country regions of South Carolina. To engage participants in intensive experiences and field trips which provides a strong knowledge base on the history of African American freedom movements and culture. 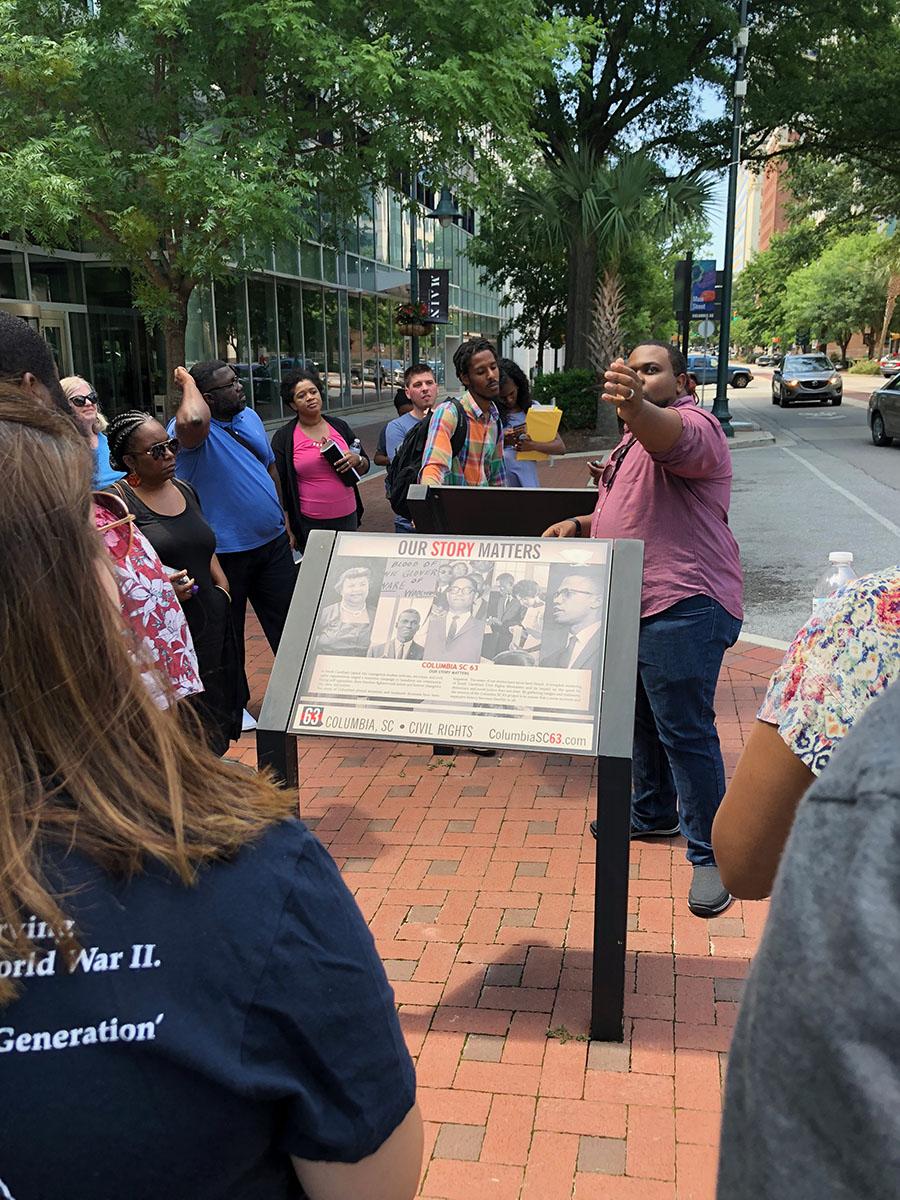