The Fourth Travelstead Award for Courage in Education

In the spring of 2017, the Fourth Travelstead Award for Courage in Education was presented to Dr. Millicent E. Brown, activist-historian currently living in Charleston, in recognition of her role as one of the first students to desegregate public schools in South Carolina and her efforts to preserve the history of “first children” who sought to desegregate schools during the 1960s and 1970s.

Dr. Millicent Ellison Brown, activist-historian currently living in Charleston, is a retired professor of history from North Carolina A&T State University. She received a doctorate from Florida State University, completing her Ph.D. thesis on the history of civil rights activism in Charleston from 1940 to 1970; other professional roles have included professorships at Bennett College, Guilford College, Claflin University, and she has served as Director of Exhibits and Museum Education at the Avery Research Center at College of Charleston.

In 1963, Millicent Brown became the lead plaintiff in a NAACP-sponsored lawsuit to desegregate the Charleston public schools where she would become one of the “first children” to desegregate public schools in our state: specifically, she was one of two African American students to enroll at Rivers High School.  Dr. Brown’s father, J. Arthur Brown, was the local and state president of the National Association for the Advancement of Colored People; she credits having been born into an activist household during the height of the civil rights movement for her lifelong commitment to progressive social change, supplemented by her years of community service as a member of the Student Nonviolent Coordinating Committee (SNCC). Her career has been devoted to addressing misconceptions of school desegregation, introducing a more thoughtful consideration of Briggs v Elliott and the Brown decision, and engaging students and faculty in appreciating connections between the school desegregation process and the current crisis in black education today. Knowing the deeply personal struggles of “first children” and recognizing that many of these students who sought to desegregate schools during the 1960s had been overlooked, in 2006 she initiated “Somebody Had To Do It,” a collaborative, multi-institutional project to identify and collect oral histories from individuals who were the first black students to desegregate all-white schools during the twentieth century civil rights movement.

The University of South Carolina Museum of Education
Chester C. Travelstead Award for Courage in Education
presented to Millicent E. Brown
in recognition of her leadership in South Carolina to further the values of integrity, intellectual spirit, justice, and stewardship and, in so doing, allowing schools to become more compassionate, more generous, more humane, and more thoughtful.
“History, despite its wrenching pain, cannot be unlived, but if faced with courage, need not be lived again.” Maya Angelou

“Let me say that I humbly accept this award but, as I always do, it is in the name of all of those original plaintiffs: Millicent Brown, et. al., included eleven children who in 1963 ventured into the previously all white schools, the first in the state. But the judge ruled that only the original plaintiffs could go in in 1963.  And I have this available (documentation) for those who may want to look at the other ten students.  But it was never about just me; it was always about that first group of eleven.

“When I heard about coming today for this award, I thought wouldn’t it be interesting if Professor Travelstead was with me because we are ironically celebrating the accomplishments of the women’s basketball team from the University of South Carolina for winning the NCAA Championship. And I thought would he share with me what I consider to be somewhat of a complex situation in time. Because to play basketball and to become a Dawn Staley or an A’ja Wilson,  I’m sure there were moments when they were high school players and may have just had a bad day and might have been in a bad mood or tired. And I’m so glad they didn’t go to Spring Valley High School. Because as a rogue cop disguised as a school resource officer, a young kind of out-of-it, bad-mood youngster was accosted and thrown across the room by this individual. And I thought if that had been Dawn Staley, who knows where the University of South Carolina might or might not be right.

“And so I raised that because I want to share with you concern moreso than criticism. But when that incident happened a stone’s-throw away from this university, I said we have a School of Law, we have a School of Education, we have a School of Social Work, we have a Department of Psychology, a Department of Sociology. Where is this outcry coming; where is this defense of this young woman?  And I would say this if I were talking to Allen or Benedict or Claflin or Francis Marion or College of Charleston or Clemson; it doesn’t matter.  I am saying we in education have got to stand up in the Travelstead tradition. And when we see injustice being done, we’ve got to stand up in our professional stances and say ‘not in our name. That’s not how we educate. That’s not what we teach our students.’

“So, I ask you, I beg you to in the spirit of a great man like Mr. Travelstead that we all commit today that we will not let in our name those kinds of incidences to happen anymore. And we will let it be known that we do not approve; we don’t want to look the other way. We have an obligation. I believe that one of the statements that the professor made said that children learn from everything they see and hear by observation of our words and deeds, and I strongly believe that. Thank you so much.” 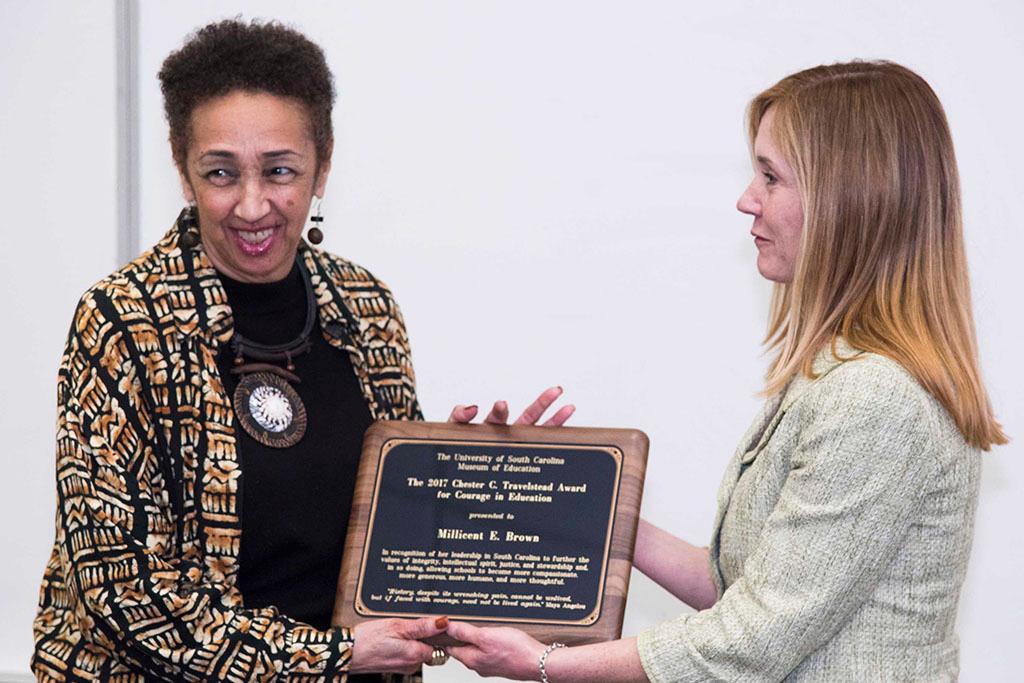